The ruby, named thanks to its vivacious red colour (Rubeus (red) in latin) is the birthstone for those lucky enough to be born in July. Symbolic of the passion and energy associated with its colour, the ruby has for centuries and throughout various cultures; been referred to as the ‘king’ over all other gemstones. The Indians call the ruby Ratnanayaka (‘Lord of the gemstones’), the Hindus called rubies the ‘king of precious stones’ and ‘leader of the gemstones’, while during the late 1880s French jewellers called rubies the ‘gem of gemstones’. 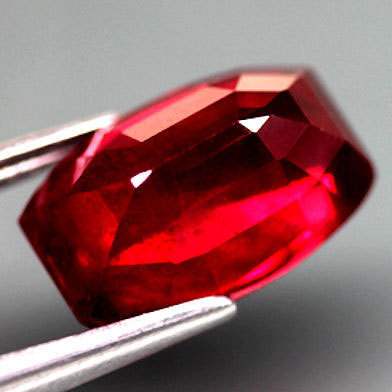 It was not until about 1800 that the ruby (and sapphire) were recognised as belonging to the corundum species of gemstones. Before that, red spinel, tourmaline, and garnet were also believed to be ruby. The red colour varies quite a lot according to each mineral deposit, so it is near impossible to determine source area from each ruby’s colour. Burma rubies and Siam rubies refer more to quality than location, however the most desirable colour that can be found in a ruby is the so-called ‘pigeon’s blood’; pure red with a hint of bluish purple. The pigeon blood ruby is also known as the star ruby. The centre is made up of a 6-ray star with perfect symmetry. Star rubies are usually given an oval or sometimes round cut.

According to the GIA, the chromium mineral that gives the ruby its red colour also causes fluorescence which makes rubies glow like a fire from within. In the case of rubies with more brownish tones, iron is present. Paradoxically however, chromium is also what makes this gem scarce because it can cause fissures- indeed, few rubies actually grow large enough to crystallise into high quality gems. Those that do can command even higher prices than diamonds! The Sunrise Ruby is the world’s most expensive gemstone other than a diamond. A 25.6 carat Burmese Pigeon Blood Ruby set with two diamonds. It sold at auction for $30 million in 2015.

In ancient, mythical times the ruby was associated with the sun and was said to have positive effects on mental and physical health. They were also thought to be able to prophetise danger. The stone was said to turn dark as a threat approached. Ivan the Terrible of Russia believed rubies were beneficial for the heart, brain and memory and that rubbing rubies on the skin would contribute to vitality and youth!